Five days before the election, and seven days after the second debate, it is time for an update on the polls.  We counted 20 polls that atarted their fieldwork after the debate. Among them, 11 are classified as web polls, 6, IVR and 2, Live phone. We did not find the mode of administration for one poll. This is quite different from the overall distribution since September 1st: 79% Web polls, 14% Live phone and 6% IVR. There are 186 polls total since then.

After reading through each pollster's methodology, I made a few changes in the classification. At first, I had classified all the polls who used IVR as IVR polls. However, some of them have a larger part of their sample coming from web than from IVR. I reclassified them as Web. I also reclassified IBD-TIPP who uses live phone and web as Live phone because the major part of the sample comes from Live phone interviews. NORC also has a small part of its Amerispeak web poll for which interviews are conducted by live interviewers. As you can see, change in methods in this election as compared to 2016, is mostly in the greater reliance on mixed modes. So I decided to compute a new variable to compare the polls using mixed modes and the others.

Where are we now?

The following graph shows that, a few days before the fist debate, support for Biden increased by about one point overall. Since then, support for him is stable or very slightly declining according to the polls. As of yesterday, his support would be at around 55% of voting intentions compared with 45% for Trump. 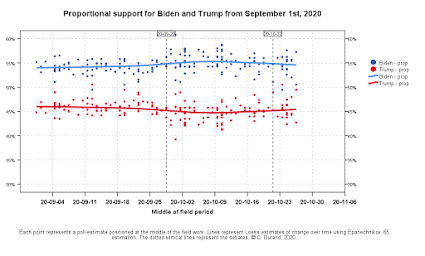 Let us now examine the difference between modes of administration. As we can see in the following graph, we are still in a situation where the web polls do not show the same trends as IVR or Live interviewer polls. There are a lot less telephone polls than web polls, which means that we have to be careful and not jump to conclusions. However, the portrait is consistent. Polls that mainly use the telephone to reach respondents show an increase in support for Trump while web polls don't. On the opposite, these polls estimate that the support for Trump decreased a little lately. In addition, we still observe that the IVR polls estimate the support for Trump at almost five points more than the web polls, at close to 50%. The live interviewer polls are in between. the IVR polls' estimates are significantly different from the other polls' estimates. 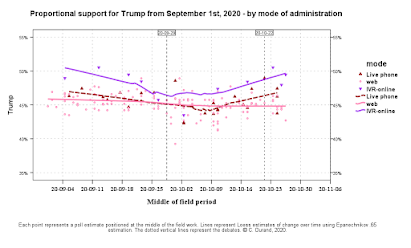 We also wanted to examine whether the use of mixed modes made a difference. The portrait is similar to what we see according to modes. Of course, mixed modes are mostly used in polls that are mainly IVR or live phone but some mainly web pollsters also use mixed mode. On average, polls using mixed modes estimate that the support for Trump has been increasing lately while those using only one mode tend to estimate a slight decline. 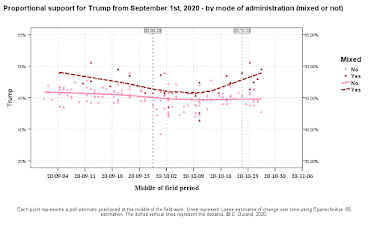 If I use a regression to predict support for Trump, controlling for the number of days each poll is in the field and for when the poll was conducted, the effect of mode is the following: The web polls estimate the support for Trump 1.9 points lower than the IVR polls and the Live interviewer polls, 1.6 points lower. When polls use mixed mode, their estimate is 1.2 points higher.

A number of reasons can explain differences in trends and in forecasts according to mode, among them, the source of the samples, the weighting used, the question wordings and the presence of a leaning question, the length of the questionnaire and the number and type of questions that are asked before the voting intention question. There are also substantial differences between web pollsters. The methods used to recruit participants vary from probabilistic panels recruited though telephone or face-to-face interviews, to opt-in panels, to platforms like Lucid or MTurk to recruitment via adds on apps. Whether there are differences by mode of recruitment is another area to explore. I was impressed to see that, although we still have methodological reports missing, the majority of the polls now come with rather detailed information on the methodology.

In my next post, I will look at the "Shy Trump" hypothesis.