I thought it was important to follow closely the last polls. Here is what I get. The graphs use all the polls conducted from August 1st to October 5.

The first graph shows the relative support for Donald Trump and Joe Biden. The vertical line represents the debate. It shows that, on average, support for Joe Biden seems to be going up since before the debate but even more since the debate. However, this is the average of all the polls. Therefore, it reflects mostly the web polls because they account for 74% of the polls conducted during the period. 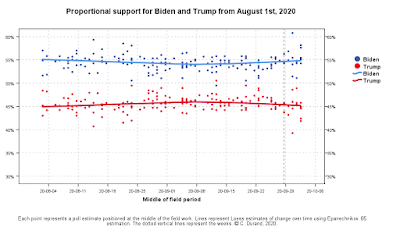 If we examine the trends according to each mode of administration, the portrait is somewhat different. As the following graph shows, the polls that use the telephone, whether with live interviewers or using automated dialing see a clear and more substantial downward trend for Trump than the web polls. And this trend seems to have started way before the debate -- around September 15. As in 2016, web polls do not detect movement where telephone polls do. And IVR polls estimate support for Trump systematically higher than the two other modes. 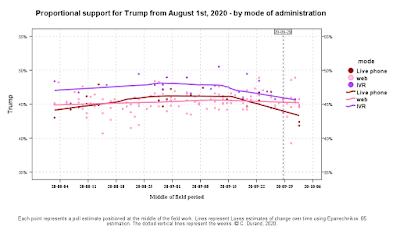 In conclusion, we should be careful before concluding on the poll trends. The difference between modes persists and it is similar to what we have seen in 2016.