Brexit: we should have known better

Well, Quebec voted no to leave Canada, Scotland, no to leave UK and then UK leaves the EU. It is a bit ironic when you see it from Quebec, although Europe is not a country per se.

I am not sure that pollsters failed that much. However, I think analysts -- and I include myself -- failed. And I know how and why I failed. At the beginning of the campaign, a colleague of mine, Henry Milner, told me that it may be that, in this referendum, the status quo side was the Leave side. His argument was that older people tended to vote Leave, that they were raised in a country that was outside the EU and they may want to go back to "normality".

So what is the consequence in terms of analysis? The "Law of even polls" -- which states that when it is equal, status quo or the more conservative side is likely to prevail -- still applies...but you ought to know which side is status quo! I should have known better. I amend my law, adding this by-law: If you want to know which side is status quo, look at how older people vote. They are the ones who win elections. People between 18 and 34 years old form less than 20% of the population and an even lower proportion of the voters.

So, here is the graph that I get when I attribute 67% of non-disclosers to the Leave side instead of the Remain side (the reverse of what I have done so far).  I get a perfect prediction of the results. 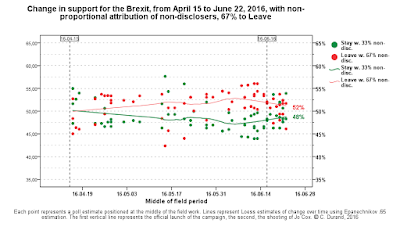 A number of analysts, journalists, pollsters noticed during the campaign that older people clearly favored the Leave side. This should have rung the bells and led us to conclude that, in a very close situation, the Leave side was likely to win. In my case, I should have listened and attributed two thirds of the non-disclosers to the Leave side instead of Remain. With this procedure, the prediction is perfect.
Publié par Claire Durand à 10 h 26