Brexit, an update that changes things a bit

I was not supposed to update unless there was some substantial change. Since yesterday, we added 10 new polls, i.e., those who were published since Tuesday and the Survey Monkey polls that were on the lists that we had consulted.

With these new polls, the situation is somewhat different. 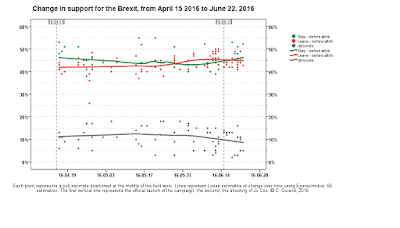 The second graph shows the estimates when non-disclosers are attributed proportionally. Even with this type of allocation, support for Remain is now ahead of Leave. 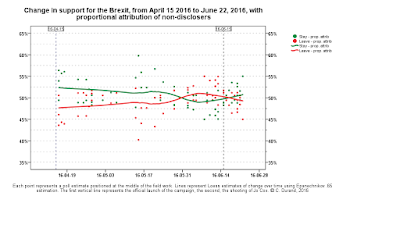 The final graph shows even more clearly that the Remain side is ahead of Leave. With this allocation, all the polls give a majority to Remain except one that puts the two sides at par. And the gap between the two is now estimated at 4.5 points. 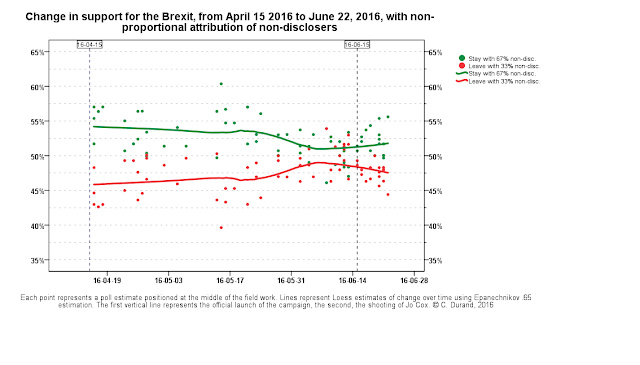 With these new results, it is possible to conclude that the fatal shooting of Jo Cox probably had an impact on the campaign. It is rather clear from the second graph that most of the polls before the shooting gave an advantage to the Leave side and, on the contrary, most polls carried after give an advantage to Remain. If we look at the last graph that uses non-proportional allocation of non-disclosers, it is less clear, but nonetheless, the only estimates that gave a majority to Leave were before the shooting. More sophisticated statistical analysis will allow to validate -- or not -- this conclusion.

With these new results, we may conclude that Remain is likely to end up with a clear advantage of at least four points. Like everybody, I am eager to see the final results.

P.S. Thanks to Luis Pena Ibarra who recuperated the data and did most of the graphs for this campaign.
Publié par Claire Durand à 10 h 44