Now, here is the situation, when the polls conducted during the week-end are included. It is interesting to notice that two pollsters -- Survation and ICM -- that used to do only opt-in panel polls conducted telephone polls. The situation right now is that the two sides are close to one another, which explains why we get contradictory estimates from different pollsters. This is quite normal in such circumstances. The graph shows that the Yes side has gained some points and the No side together with the non-disclosers have lost some.The No side is still ahead (barely) but it seems to have lost two points since the beginning of August, while the Yes side has gained close to five points. 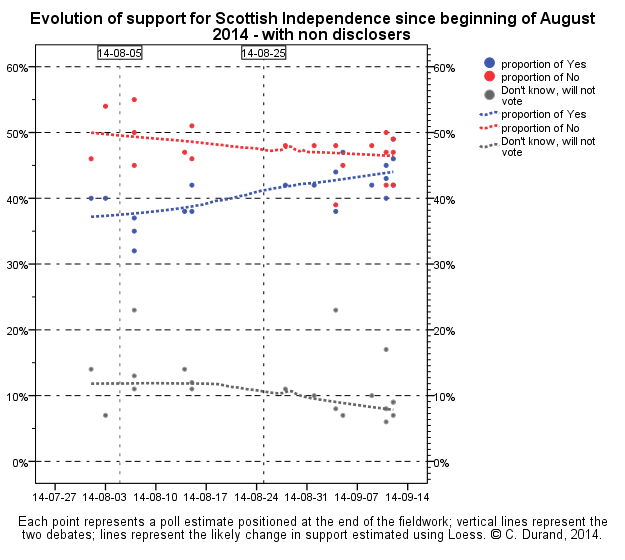 Now, if we attribute the non-disclosers proportionally to each side, we get the following graph. It shows that the increase in support for the Yes side seems to have stalled. Support for Yes Scotland is around 48% and support for Better Together at 52%. 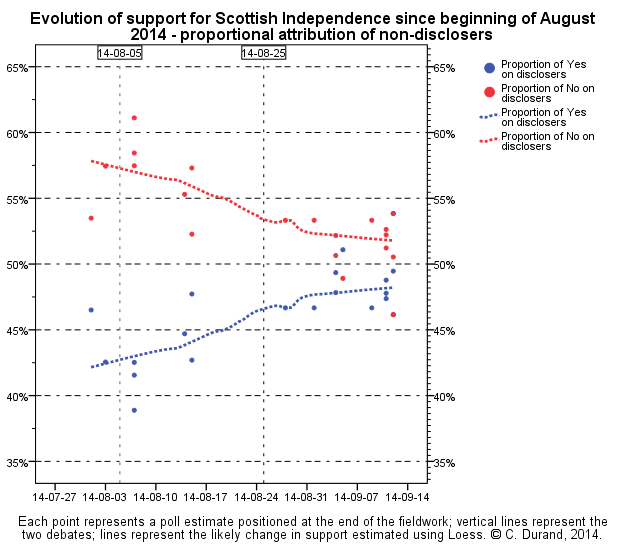 If we use a more realistic attribution of non-disclosers' voting intentions, giving 67% of those to the No side, support for the Yes side is closer to 46.5%. The difference between the two sides is estimated at around seven points. The preceding graph and the next one both show rather clearly that support for the Yes side has stopped increasing last week. Voting intentions seem to have stabilized. 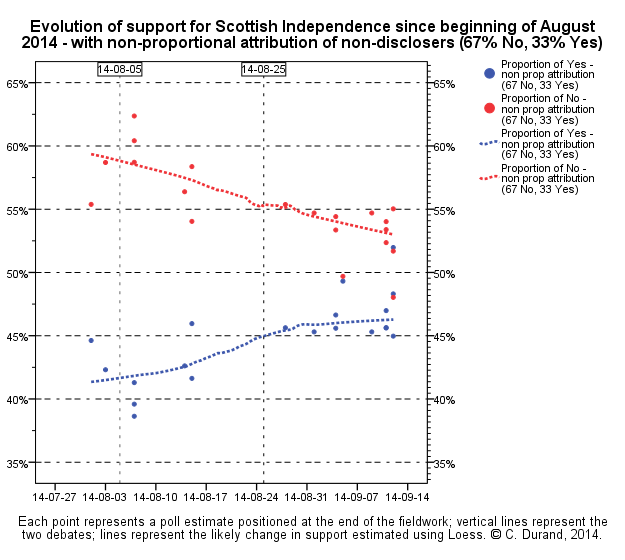 A last graph shows the part played by younger people -- 16 to 34 years old -- in the increase in support for the Yes side. Young people's support for the Yes side, already higher than in the rest of the population, has also increased more than that of older Scottish residents. This situation is very similar to what has been observed in the 1995 Quebec referendum. Support for Yes Scotland among young people is around 55% according to the polls. 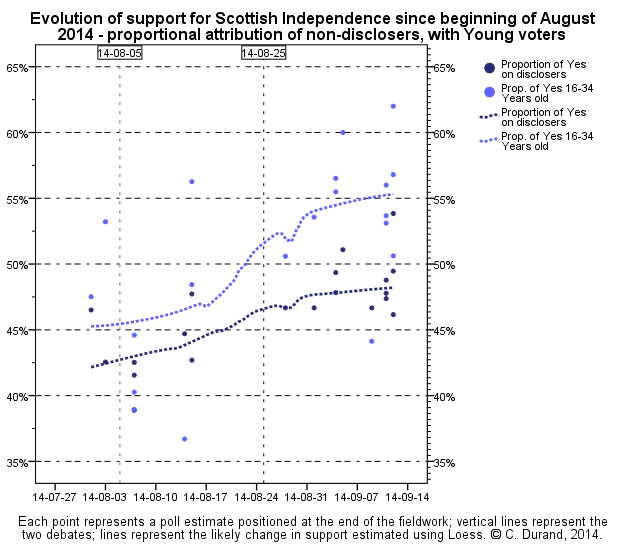 In conclusion: Are the polls reliable?

The Yes side has gained an average of 1.15 points per week since the beginning of August. Even if it would take another 1.15 points during the last week, it is not sufficient to win. But are the polls reliable? First, let us notice that the difference in estimation between opt-in panel polls and other polls has disappeared. Since August at least, there is no significant difference anymore between web polls and other polls. However, as in Quebec in 1995, the polls may overestimate the Yes side. Why is that? First, it seems that Yes supporters are more likely to answer surveys and to reveal their vote and second, as the Yes becomes more likely to win, some people may back off and finally decide not to "take the risk". As I said before, saying that you will vote Yes to a pollster has much less consequences than doing it for real. A very good analysis of the possible vote of non-disclosers -- by Stephen Fisher -- can be found here. Therefore, I still think that all possible errors of the polls would result in an overestimation of the Yes side.
Publié par Claire Durand à 14 h 31