I analyzed the polls published between January 1st, 2012 and this morning. I excluded only the polls for which there was no information on sample size. I estimated the evolution of vote intention, taking into account each poll's methodological features* . These analyses show that:
a) Estimation of vote intention for Obama is related to the number of days a poll is in the field. More days in the field mean lower voting intention for Obama and higher for Romney.
b) The larger the sample size, the higher the estimate of vote intention for Obama. Note that sample size is related to administration mode.
c) The undecided -- or non disclosers -- are distributed equally between Obama and Romney (at the aggregate level, at least).
d) Using a Likely voter model has a significant impact on estimates. Polls that use a Likely voter model give on average 1.3 points more to Obama. However, this effect varies with time.

Finally, I computed two models each for Obama and Romney, one for polls using a Likely Voter Model (59% of the polls) and one for the others, i.e., with a population defined as "registered voters"(40%) or "adults" (1%). All the other variables have been put at the mean -- number of days (4.22), sample size (1268), proportion of non disclosers (7.77). Here is the illustration of evolution with time. 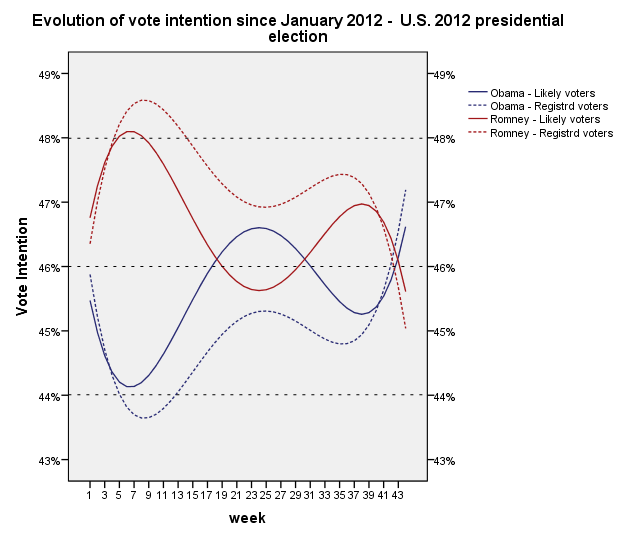 The solid lines show the evolution for polls using a Likely voter model, the dotted line for the other polls. Whatever the model, on average, I have -- like others -- Obama going towards a short majority. The difference is one point in favor of Obama for the polls using a likely voter model, two points for the others. Is it significant? For each poll, no, for the average estimation, not sure, since you have to take into account all the factors that can influence the estimation, i.e. bias related to non response or coverage, turnout, etc.

Eager to see if the vote will conform to the model !

* For interested specialists, I run a multilevel model where polls are embedded within weeks. The effect of methods is estimated at level 1, the poll level; evolution with time is estimated at level 2. The evolution with time is significant at power 4 and there is an additional impact of quadratic time on the effect of the likely voter model.
Publié par Claire Durand à 15 h 29