To Brexit or not to Brexit,...

Welcome to my first analysis of the polls regarding the Brexit. I will perform the same analysis as for the Scottish referendum, using graphs of local regressions. I will look at the likely change in support for the Brexit and at the differences between modes.

First, here is the graph that takes into account all the polls conducted since January 2016. The dots represent poll estimates. The lines represent the estimation of change using local regressions (epanechnikov .65 for the specialists).

The graph shows that the two sides are now practically at the same level according to the published polls. It also shows that the proportion of non-disclosers -- including the undecideds and those who say they will not vote -- has decreased since March, from around 17% to 11%. It is the Leave side that has gained most from the decrease of the non-disclosers. The proportion of supporters for Stay has remained the same over the period. 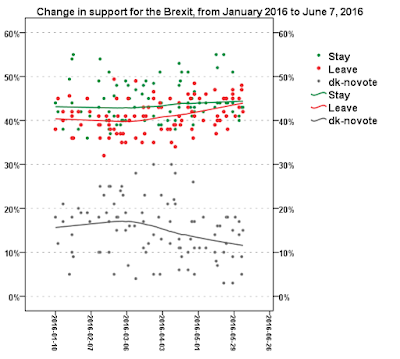 
The following graph illustrates the change in support when undecideds are allocated proportionally to each side, which is the usual procedure for all the pollsters. The portrait is quite the same as with the preceding graph, i.e., the two sides are at par, with a possible tiny advantage for stay. 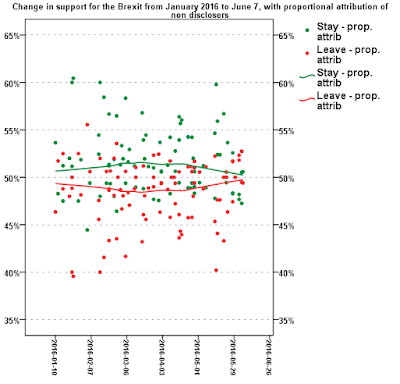 Since I do not have a theoretical or empirical justification to change the attribution that I used in the Scottish referendum, I decided to use the same. Here is the graph that I get using this procedure. The two sides are now about five points apart, which is -- I think -- more realistic. 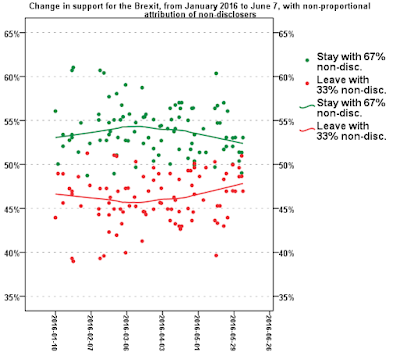 In conclusion, it will be very interesting to follow the campaign in the next two weeks. My next post will deal with  the substantial differences in the portraits traced by web polls compared to telephone polls.