Brexit, the day before

In this last analysis before election day, I use only the polls that were conducted during the campaign, i.e., from April 15 to June 20. If new polls were published since then, it may hardly change much what we see now. However, if there are such polls, I may update this message during the day. I first look at change in support overall and then, I look at the different portraits traced by the two modes of administration, i.e., telephone and web opt-in.

The first graph shows the estimates of the different pollsters. It shows that the two sides are very close to each other. It also shows that the proportion of non-disclosers -- including undecideds and those who say they will not vote for pollsters who keep them in the samples -- is quite stable. However, this proportion varies much between pollsters -- from 3% to 26% -- so that it is not appropriate to look at the estimates of remain and leave without attributing these non-disclosers so that the proportions of Remain and Leave add up to 100%. 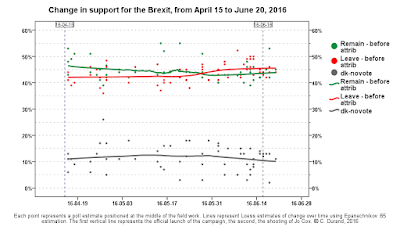 The next graph shows change over time when non-disclosers are attributed proportionally to each side for each poll. This is the procedure used by all pollsters, except for one recent BMG telephone poll. I will go back to this question later on. The portrait that emerges is that the positions have "crystallized" since the end of May. Since then, support for leave appears to be somewhat higher than support for remain. One also has to notice that the ceiling was reached not after the shooting of MP Jo Cox, but much before.

It is interesting to point out that the same situation occurred in Scotland for the referendum on independence. You can see in my last post of that campaign that support for both sides had also reached a ceiling close to 50% in the last weeks of the campaign. However, In Scotland, it was slightly more favourable to the status quo. 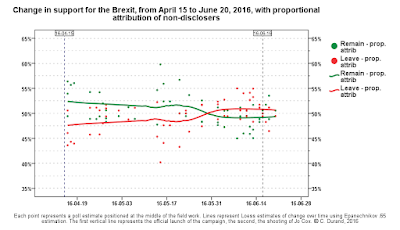 However, what Scotland -- and Quebec 1995 -- also show is that a proportional attribution of non-disclosers is likely to overestimate support for change. For example, in Scotland, a non-proportional attribution of 67% to the No side gave an estimation that was still a few points lower than the results of the referendum. You can see this analysis in my post Scotland, the day after.
I used the same non-proportional attribution of non-disclosers for the Brexit. One pollster, BMG Research, used the same attribution for its telephone polls (not its web polls). The pollster states that it asked a number of questions (which ones, we don't know) that led to conclude that this allocation was the appropriate one. You may look at the BMG report here. In addition, this post by Elections, etc. shows that polls almost always overestimate change.

The following graph shows the likely change in support over time using non-proportional attribution. Remain appears to be about two points ahead of Leave. In fact, with this allocation, there was only a short period last week where Leave was ahead of Remain. The last polls tend to show Remain ahead, at least when we use non-proportional attribution of non-disclosers. 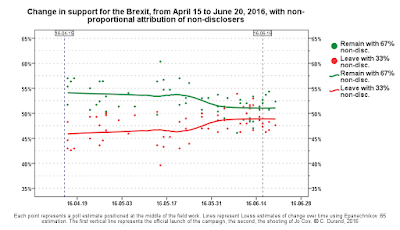 Is the portrait traced by the two modes of administration the same? Not exactly. The next two graphs show the portrait of change over time in support for Remain, using either proportional or non-proportional attribution of non-disclosers. The two graphs show that the portrait is not the same according to mode. They both show also that telephone polls tended to estimate support for Remain five points higher than web opt-in polls at the beginning of the campaign but this discrepancy was reduced to two points at the end. With proportional attribution, telephone polls estimate support for Remain at 50%, opt-in web polls at 48%. With non-proportional attribution, the respective estimates are 52% and 50%. This means that the global estimates depend in part on the proportion of Web versus telephone polls that are conducted, so that weighting according to mode of administration -- like Number Cruncher does -- is not a bad idea. 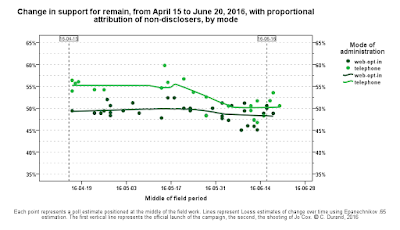 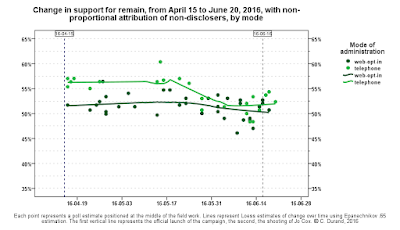 It is interesting to notice that, as with the Scottish 2014 or the Quebec 1995 referendum, the Change side had momentum during the campaign but it  reached a ceiling in the last two weeks (or the last few days in the Quebec case). It seems clear that referendum campaigns do make a difference. I leave it to political scientists to analyse why and how it does.

The fact that the two modes of administration do not give the same estimates, not only of the level of support but also of change over time, is problematic. It is even more problematic since often, in small markets, the only polls that are conducted are web opt-in polls. We will see tomorrow which mode  led to better estimates. But nonetheless, there is an urgent need for research on ways to improve samples and estimates of polls if we do not want polls to mislead voters.

Will Remain win tomorrow? Like many others (see Elections, etc, for example), I think that it will. First, I think a non-proportional attribution of non-disclosers is more realistic and appropriate than a proportional attribution. Second, my own analysis is that the "Law of even polls" applies, i.e., when polls' estimates show two sides at par, the status quo side is likely to win, as it was the case in recent elections (Israel, UK, for example). If Remain does not win, I will have to modify the Law to take into account exceptions and figure out why this campaign was an exception, at the end.

I will have a last post on Friday to compare estimates and results.