Scotland the day after: how did the polls fare?

Here is the graph that I published in my previous message on Wednesday afternoon. It shows the likely result when I attribute 67% of non-disclosers to the No side. The results of the vote (55.3% No, 44.7% Yes) tell us that the No vote is underestimated by almost two points, even with this non-proportional attribution. Two polls were published on Election Day: YouGov put the No at 54% and Ipsos-Mori at 53% (this poll was conducted before Election Day however). This may mean that there was some last minute movement. I checked whether my estimate would have been much different if I had given 75% of non-disclosers to the No side. It does not change enough in the prediction to warrant publication. 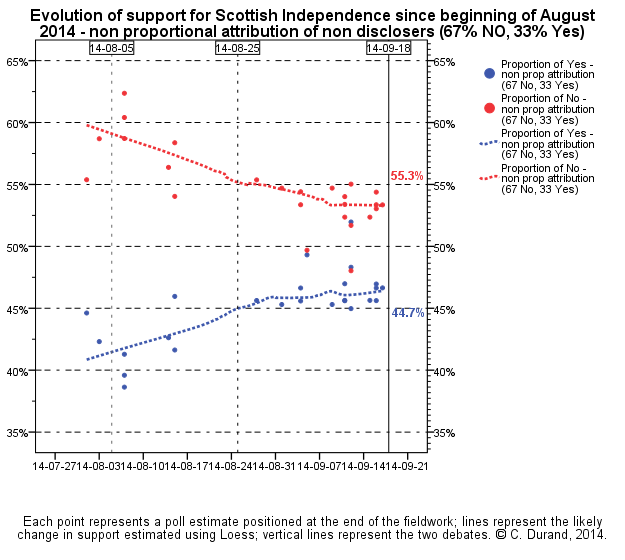 As with the Quebec 1995 referendum, the polls underestimated the No vote and this, even when we allocate two-thirds of non-disclosers to the No side. This seems like a systematic bias that we will have to take into account in future referendum votes. However, the opt-in panels did not fare better nor worse than other polls at the end of the campaign.
Publié par Claire Durand à 08 h 27